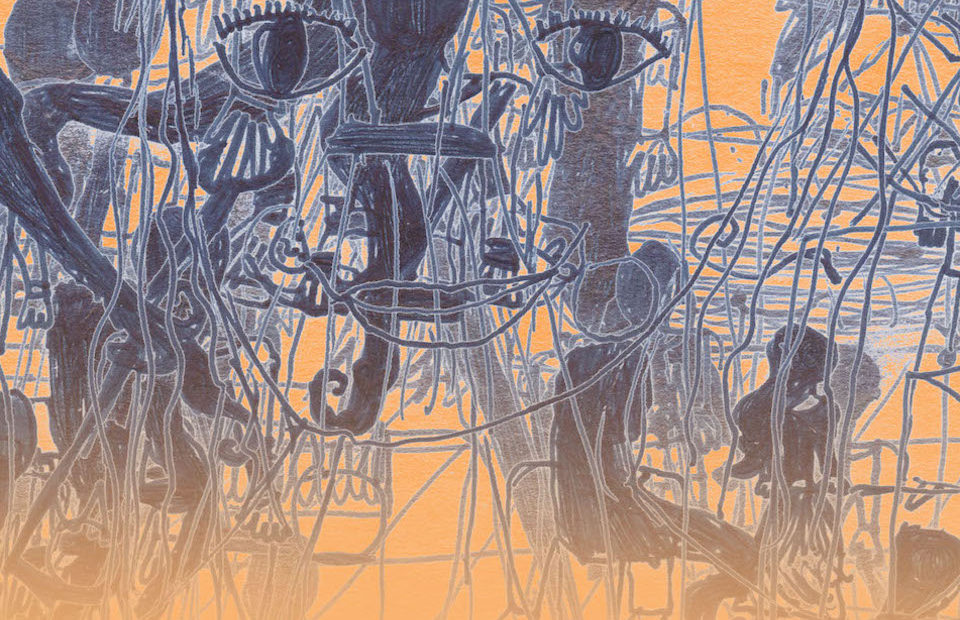 a section of the cover of my novel, Black Wings; images by Minal Saldivar and collage by Oskar Sonnen

Behind every story is another story. The new cover of my novel, Black Wings, is no exception. The image, designed by my artist friend Oskar Sonnen, is a collage of six black and white miniature drawings by Minal during summer 2013 when she was 10 years old.

I remember the afternoon, five years ago, when Minal created the images. Adults sipped tea at the home of Zohra Yusuf, a human rights activist, who in 1983 was my first editor while I served as an intern at the Star, Karachi’s radical evening newspaper that gave voice to women and activists during one of the darkest periods of Pakistan’s history when the country was controlled by military dictator General Zia. Whenever I’m in Karachi, I make sure I squeeze in a vist with Zohra, and we always stop by the apartment of Asmi Sahib, former editor of Dawn, who’s a family friend and Zohra’s neighbor.

That particular afternoon at Zohra’s apartment was no different. Adults chatted while Minal was bored. She didn’t have a smart phone back then, so I handed her a pen and a 5×4″ notepad that I’d picked up from Rice University’s Chao Center for Asian Studies.

Sitting to the side, Minal created a series of six miniature drawings. I held on to the drawings for years, before passing them to my artist friend Oskar Sonnen in the hope that he’d help me find the perfect way to frame the images. But, instead of framing the images, Oskar created a collage of the drawings. When Minerva at Veliz Books asked if I had any ideas for a cover, for Black Wings, I shared the collage.

Black Wings is being released next month in the US for the first time. The novel was first published in June 2004 by Alhamra Press (Pakistan) when I was pregnant. A few months after the book was released in Pakistan, Minal was born. Needless to say, my focus shifted from writing to motherhood. I was not able to tour the novel, nor was the publication readily available in the US. I gave readings in Karachi, Lahore, and Islamabad, but I never launched and toured the novel in the way the book deserved.

In 2018, when long-time friend, fellow writer, and Veliz Books co-founder Minerva Laveaga Luna offered to run a second edition of Black Wings, I used the opportunity to tighten text and chop 30 pages. The new version of Black Wings is a leaner novel that’s reflective of the writing style that I developed since the novel’s first edition was published. However, the heart of the novel—the healing power of stories and multigenerational exchanges that cross continents—remains constant.

The publication includes a list of acknowledgements, too long to add here. For now, many thanks to Minerva and the Veliz team; Minal and Oskar for the cover; Sorayya Khan, Liliana Valenzuela, and Fan Wu for writing beautiful blurbs; to Angela Martinez and Courtney Roberts co-founders of Black + Gray Studio for designing an amazing website and blog, and to all of you (you know who you are) for your support and stories.

novel
« protesting for equal education for all…
one coup per dictator… »